Monday was a day of travelling for most people with airflights from various places in the country. I drove up from South Carolina and got to Raleigh around 1pm. The new Red Hat offices are very nice but still under construction with some people already in the floors and others still over at the old location on North Carolina State. I got to meet with various old friends (Bill Nottingham, Rob Landry, James Laska and Doug Ledford). Other people I hoped to run in would have to take trips across town later.

Later in the afternoon, Seth rolled in like MCA, and we began doing tag team pickups from the airport. By around 6pm we had enough for a dinner run, and found that many downtown places are closed on Monday night. In the end we ended up at Bu Ku and had a nice mix of "Street Foods". Icon (Konstantin) and MC Vidal ordered the Red Tree mix which was all the vegetarian mixes... others filled out their meats and a good time was had by all. The best part is outside of the restaurant is the open source cow.. while not spherical it does have nice red horns. 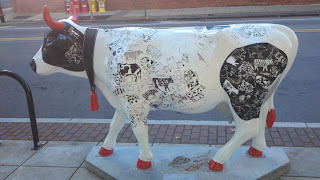 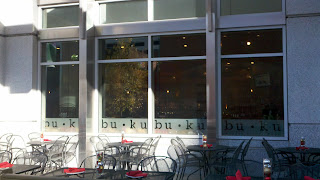 After dinner, we retired back to the hotel while I went back to pick up Nick Bebout from a late flight. People back at the hotel caught up with email from the day and scoped out what items would be needed to get two factor authorization working.
Posted by Stephen Smoogen at 8:24 PM