Oh My Goodness I so want this 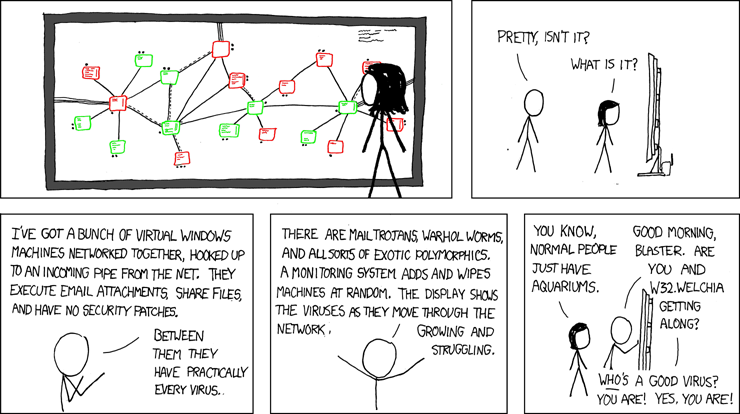 I think I will start on my aquarium this week! [The image is copyright of the XKCD author who I can't remember and is used under the Creative Commons license. Please see http://www.xkcd.org/license.html for more information.]
Posted by Stephen Smoogen at 7:40 AM

Well I spent the last couple of days on a lot of different things.. and got a little bit done on all of them..
Thats all folks.
Posted by Stephen Smoogen at 12:53 PM

I have to grudgingly agree with Dr Spafford on this. On our public ssh servers our main problem used to be users who set passwords to guessable words. However, while we have this occur everynow and then, the bigger problem is where users use the same password everywhere. While we limit the number of ssh attempts, make the users pick stronger passwords.. we can't stop them from using it at AOL etc. And even SSH blocking is limited as the crackers have parallelized their tools enough that as we block one host another picks up right where we blocked the last and they come from all over the internet that we can't really shut everything down.

And even if we were able to block all that.. we would just be the mythical bosun on the Titanic that Dr Spafford mentions.. making our selves useful as the ship sinks.

The OLPC project has gotten to the point of shipping models to people. If I currently had the spare money, this is what I would buy:

The laptops are cool, great, wonderful, and meaningful to help children in the world. I am currently trying to find some projects who will pay me in one (well two.. one for the kid somewhere who needs a computer.)
Posted by Stephen Smoogen at 1:19 PM

So what I have been working on the last 9 days has been pretty much the same-old,same-old.. but not realizing 9 days had gone by :).

Thats about it... my brain has exploded so I am cleaning up.
Posted by Stephen Smoogen at 1:10 PM

I would like to say that I am not a qmail fanatic, and Daniel J Bernstein is not a friend of mine :). Actually I remember some testy emails back in 1997/8 where I was rather brash and talking out my ass and thinking he was doing the same. However, I would like to say a couple of things nice about qmail and DJB.

Posted by Stephen Smoogen at 9:24 AM

US TV comedian Stephen Colbert appears to have failed in his attempt to enter the 2008 presidential election.

Despite stumping up a $2,500 (£1,250) deposit, Colbert's application to stand in South Carolina's Democratic primary was rejected by 13 votes to three.

And his "policy platform" won him instant notoriety when he promised to "crush" neighbouring Georgia if elected.

Personally I think that yes Colbert was playing SC for an act, but to be honest I think both parties were worried that too many people would vote for him than the current 'annointed' candidates. I looked at his candidacy as a 'none of the above' vote.. and if I were still living in SC would have voted for him on whatever ticket he had been on.
If for any reason, it was because he was addressing an important item I read in the school texts in State History: The creation of Georgia stole most of the territory that South Carolina had been 'granted'. Well not in so many words, but the various graphs of showing SC as stretching to the Pacific before Georgia ( a prison colony as pointed out several times in the text) and then just having a small strip in the far Northwest corner that was eventually stolen (sorry realigned) by Georgia later on.

Oh well, hopefully Ron Paul will still be on the ballot in NM by the time that primary rolls around.

Posted by Stephen Smoogen at 2:00 PM

Email ThisBlogThis!Share to TwitterShare to FacebookShare to Pinterest
Labels: politics

So I took the kid on a trick-or-treat romp last night and came across what seems to be the latest fad in playing mean tricks on little kids.
As it was.. I can see why some people find their houses covered in TP.
Posted by Stephen Smoogen at 2:12 PM