In reading through various business literature lately, I have come to the realization that I was mistaken in what I thought Fedora to be. For a long time I was under the impression that Fedora was the replacement for Red Hat Linux.  A place where an RPM-based Linux could be built and slowly changed, with its target audience being small businesses and small cost enterprises that did not fit into the larger mould that Red Hat Enterprise Linux handled.

However, in my readings on technology creation and acceptance, I have found that Fedora is not there and has not been there for quite some time. At some point, probably when Extras and Core merged, Fedora began to morph into a distribution for Innovators by Innovators. Its target audience is innovators who are looking to be on the bleeding edge of technology because that is what drives them day in and day out.

In the 'standard' technology acceptance curve... new shiny neat things are forged on the left hand side by innovators. Things that might work are then adopted by those in the visionary area and tested.. and if enough momentum occurs the basic technology will cross the chasm into mainstream acceptance. In our own myopic picture of Linux technology changes and acceptances.. we see the following chart 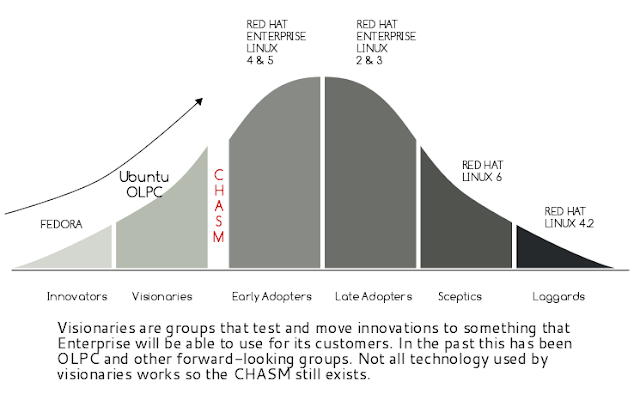 On the left we have the Fires of Fedora, where our smiths forge the many new things that are later used in other Linux distributions. As we move right, we go for more and more conservative change sets. Some things the smiths create make it into more conservative distributions, some stay in Fedora... and some get thrown back into the smelter for a later date.

After looking at this, I have realized that many of our cultural problems within Fedora are because we haven't realized how much Fedora has changed. We are trying to put in stability and brakes on a runaway innovation train, and our arguments sound as 'strong' as those of people wanting to return to a Gold standard for currency.

This does not mean that our arguments aren't without merit, for without some visionary intermediary technologies, the Fedora created in the fiery pits will never escape to larger audiences. 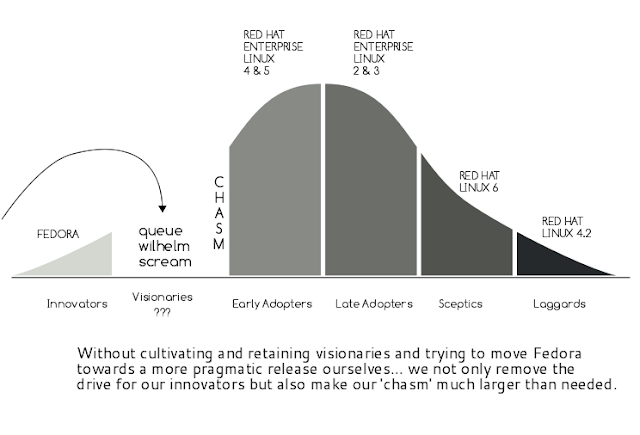 So what do we do? We need to look at creating a middle ground, a place were visionaries can pull from Fedora products that meet their longer term goals.

[I want to thank Mizmo for the help with the art. The art represents my views and mine alone. I need to add a CC BY license to the art somewhere.. will figure that out later.]
Posted by Stephen Smoogen at 2:26 PM

Email ThisBlogThis!Share to TwitterShare to FacebookShare to Pinterest
Labels: Fedora

Maybe Fedora rawhide is where the innovation happens and the visionaries are the end users developing and using official Fedora releases?

@Leif, that was my assumption but on listening to the many people talking about how they use Fedora these days.. its all of Fedora that is for innovation.

Not enough people test rawhide or feel comfortable enough so they wait until its out into an alpha, beta or release before running something new. This makes every release the equivalent to RHL-X.0 where things are going to break but it will be fun (at least to some people :)).

Excellent post. In the past I have occasionally used the N-1 version of Fedora as a sort of "visionary" setup. Perhaps extending at least security updates for a longer period of time would work.

The problem with using N-1 is that it's dead. Sure, nominally it's supported. But try logging a bug against F12 today and see how far it gets you. 99 times out of 100 it'll sit there until it's automatically closed when F12 goes end of life :-(

Of course, the same problem exists with N. For example, I've never yet had any of my X11 related bugs fixed, regardless of when they were reported. But the problem's much worse with N-1.