The Fedora Infrastructure Hackathon is currently going on in Fredericksburg Virginia outside of Washington, D.C. My first day was to get to the site from North Carolina which I did via the US Amtrak system. I have not been on a US train in many decades, and was not sure what it would be like. First off, getting onto the train was incredibly easy. I bought a ticket, arrived, and got on the train with other people. The conductors and other staff were friendly and helpful in getting me a seat. The crew were also very helpful to an older gentleman in a wheel chair in making sure he got food and drinks. 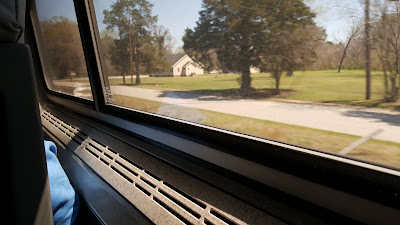 Next, the train seating was comfortable and I had plenty of leg room. The leg room on each seat was equal to business class seating in most planes. The person in front of me could lean back quite a bit and not interfere with my long legs. While the chair cushion slid out a bit, it was much more comfortable than the first class I had sat on a major airline recently. The ride was fairly comfortable, there was the general back and forth motion, and 'turbulence' when the train had to move off to a side track, but it was in general a lot smoother than driving I-85/I-95. 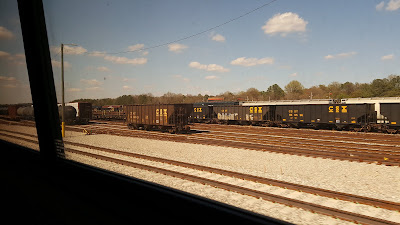 The views were very good and it as nice to not have to worry about "stayin' alive on  I-95". The train had a food area which served Dunkin Doughnuts coffee, various premade sandwiches and other foodstuffs. The best part was that the other people travelling to the Hackathon could all sit together and work on things for a while. This was useful due to the 2 downsides: the travel time was a bit longer than expected, and the wifi was incredibly laggy. The travel time was due to having to sit on side tracks 2 or 3 times while a CSX line went past. CSX owns the rails and Amtrak uses those rails as a lower priority than shipping traffic. So every now and then, the amtrak will have to sit on a side while the spice flows. The wifi was mostly due to a lot of people using it and a limited bandwidth available through an uplink. I am guessing it was a satellite link with a cell backup so that when something would block either, you had drops. This was ok for writing local documents, but people working on web mail would switch to music for various times. 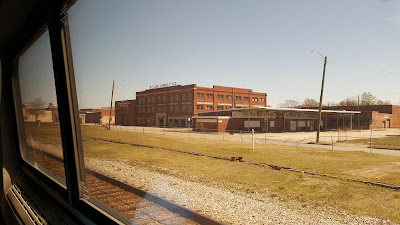 All said, I enjoyed the trip. It cost about as much as if I had driven a rental and I didn't have to deal with the headaches of it. I also did not get any motion sickness which I do when other people are driving or I am on a bus. The people working the trip were happy and looked like they enjoyed their jobs. Having seen more than enough flight attendants in the last 2 years who look like they would rather eat glass than another flight.. it was not what I was expecting. The crew also enforced courtesy rules so that when a people started talking too loud on the phone, they were asked to move to another section. When people tried putting their luggage in empty handicap seats, it was removed and the people were reprimanded that this was not acceptable. 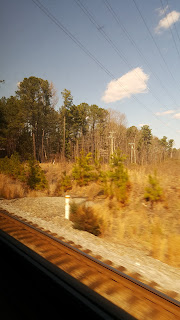 Posted by Stephen Smoogen at 11:02 AM